More than 500 executives, scholars and media representatives attended the 3rd Women in Leadership Forum, a grand event co-hosted by Cheung Kong Graduate School of Business and UN Women, with this year’s focus on providing a diverse perspective from across many industries. Close to a million more watched live via six of China’s leading online platforms, including Sina, Youku and Netease, to hear the thoughts of 30 respected business leaders, decision-makers and influencers as they discussed female empowerment issues.

Zhou Li, Assistant Dean of CKGSB, at the “Women in Leadership Forum”

Zhou Li (pictured above), Assistant Dean of CKGSB, kicked off the forum with his welcome remarks, joking “Why am I, a man, talking at a women’s leadership forum?”. He answered that question by proudly introducing four excellent CKGSB female professors—Sun Baohong, Juliet Zhu, Gan Jie and Zhang Xiaomeng. Dean Zhou also mentioned that female students in CKGSB’s MBA and FMBA programs account for a larger percentage than ever before and that 78% of staff  at CKGSB now total 78%. 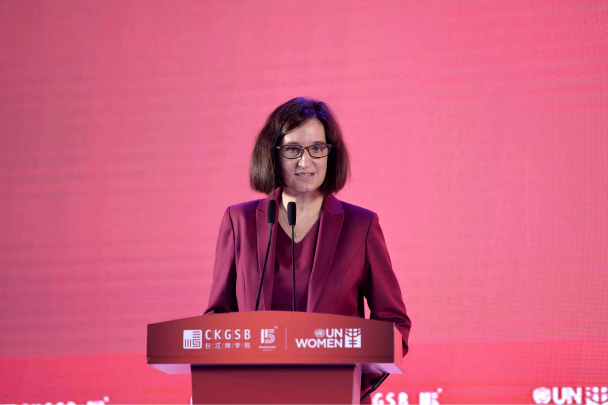 Julie L. Kavanagh, Acting Deputy Chief of Mission of the US Embassy Beijing

Julie Kavanagh from the US Embassy in Beijing then talked about women empowerment based on her own experiences. She grew up in a family advocating a gender neutral concept, so was raised to work hard for her own success. She said she believed that empowering women would lead to more growth but also noticed that even when women have basic opportunities, they still struggle to get to the top. As a result, the US Embassy set up a leadership group to cultivate future women leaders through skill-based activities. This group focuses on gender violence, economic empowerment and participation in peace and security, as well as the protection of women and girls. Since 2007, over 100 women have been recognized for their leadership by the State Department as part of this program. Progress has also been made in the number of high ranking female diplomats in the US Embassy in Beijing. Kavanagh said she very much looked forward to the day when the presence of female leaders will not even be remarked upon and she advised girls and women to not take themselves out of the race before they start running. 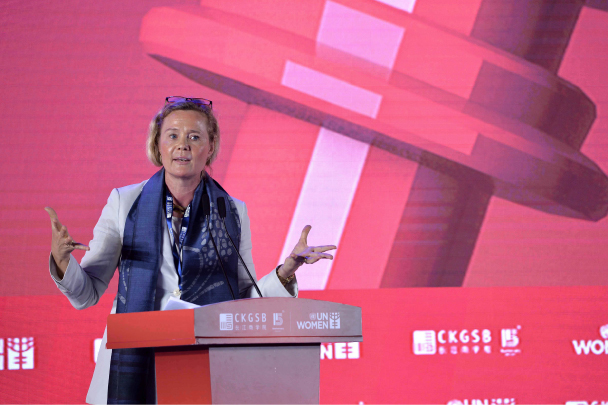 Asa Torkelsson from the UN Women then talked more about women’s development in business, saying that women have to balance work with their families when they take on 2.5 times as many family chores as men, adding to the burden that women feel when they take on leadership roles. With Julie Kavanagh mentioning that a gender balance benefits families and communities,  Torkelsson built on that idea, asserting that a gender balance also benefits business, saying, “Businesses in times of crises survive better if there is balance on corporate boards.” She cited Alibaba founder – and CKGSB alumnus – Jack Ma bringing women on to his board and involving female workers in his company as a good example for other companies. Asa also said she looked forward to seeing more work environments that are conducive to women and supportive of female leaders. 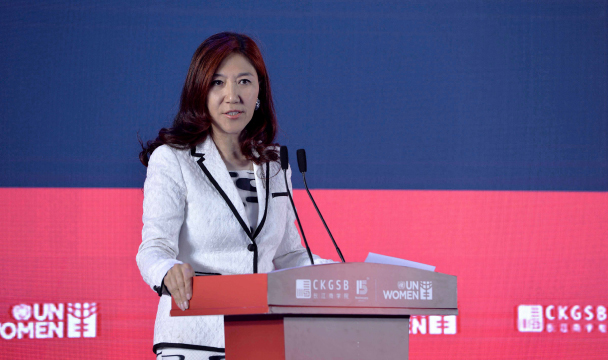 Next, Wei Sun Christianson talked about the bamboo ceiling for female employees. She said Morgan Stanley has always valued their female staff and has started a program called “Innovation Lab” to create opportunities for women and cultivate women technical leaders, while another program, “Return to Work”, allows women to take time off and return to their posts once they have sorted out their family affairs. With the program now in New York, London, India and Hong Kong, over 200 women have rejoined the workforce at Morgan Stanley. Wei Sun said she believed that the company should put consistent efforts into gaining support from senior management in order for women to succeed in their careers. Dreams, passion and skills are what a woman must have if she wants to succeed, Christianson said, adding, “You need to have a dream or plan to succeed. You need to have passion to fuel your dream. And then, you need the skillset – it is key.” 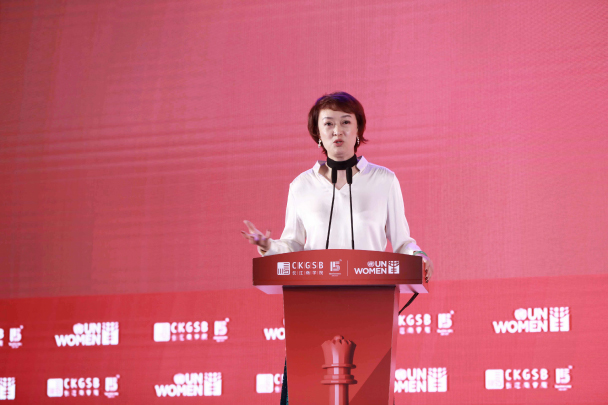 After Wei Sun Christianson’s speech, IBM’s Gill Zhou shared with the audience her thoughts on her own professional career. As a female CMO, she has survived in a tough business environment and made it to the top management level of a leading company. She gave two pointers on the secret to her business survival. The first pointer is the balance between ziwo (self-confidence) and feiwo (self-effacement). A CMO should consider herself as the company’s CMO or the CEO’s CMO instead of herself. This is what she meant by feiwo. She suggested a CMO should study the strategies, tactics and growth path set by the CEO and consider the CEO as her first client. But as the same time, a CMO should have the confidence that she is the one in the company who most understands the market and sets the market strategies that best fit the company. This is what she called ziwo. The second pointer is the balance between qiubian (change) and bubian (immutability). She stressed the importance of qiubian, saying that “change is part of our DNA as a 106-year-old company” and a company should manage changes with changes. But she also mentioned the necessity of bubian, or immutability, with an example of her staying in one company for 16 years, directly facing problems when they arose, instead of running away from problems and switching companies. 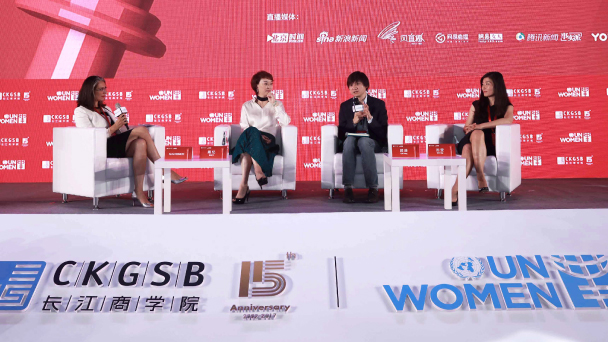 After these keynote speeches, Gill Zhou was joined by Evan Guo, CEO of Zhaopin.com and Daisy Shen from KPMG, in the first panel discussion, which was moderated by Rachel Morarjee from the Economist Corporate Network. All of them agreed that female staff ratios are different among industries. The service industry may see a higher ratio of female employees, while STEM (science, technology, engineering and math) or manufacturing industries may see a lower one. Despite all the differences, however, they pointed out that almost all industries are seeing a growing percentage of women on boards. Daisy Shen said female dynamics in the boardroom will change business outcomes and bring much more diversity. But she also mentioned it was hard for women to balance family and work at the same time. Gill Zhou echoed her idea, but Evan Guo disagreed and said men also had many roles and pressures to handle and that women shouldn’t hide behind this idea, but instead should be persistent and confident.

Tim Payne, Senior Partner & Head of Asia for Brunswick, opened the afternoon session with his speech “Empowering Women into Leadership Roles & the Role of the Media Industry”. In his company, he said 60% of the leadership and 70% of employees are women. But holding female staff is still hard, he said. Much of the social narrative undermines women and women still occupy few leadership seats. He mentioned that in China only 8.6% of boardroom seats are taken by women, despite the rhetoric of women “holding up half the sky” in China. Payne echoed the opinions expressed in the morning panel by suggesting that more inclusive businesses understand their markets better and appeal to their clients better. As for the media, Payne said he thought the media have a large part to play in empowering women, adding that advertisements should stop misrepresenting women and media should also use the proper tone when referring to women. 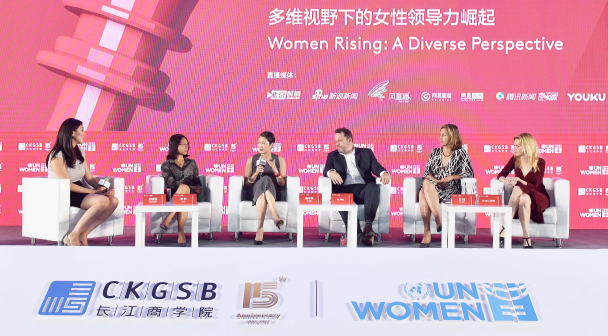 Moderated by Michelle Xing, five guests—Li Xin, Soo Kang, Tim Payne, Anke Redl and Christina Larson—then started a heated discussion about women in journalism, media and education. Li Xin said women in journalism were often highly regarded, saying, “You need perseverance and resilience and that’s what women have.” Payne was also positive about the career development path for women in media, saying, “The worker of the future is going to be empathically driven, an easier career path for a woman than a man.” All of them agreed that women should be confident and fight for what they want. Kang and Redl talked about women starting their own businesses as a way to get around the “glass ceiling”, while Payne said he thought language in the media should strive to be gender neutral. Liu Nan, Founder & CEO of Mia, then gave an interesting and insightful speech in which she talked about her transition from a white collar worker to a mother and then to a company founder. When asked how she balanced her work and life, she said, “There is no balance, only all-in”. She said she hoped that businesswomen would be talked about not because of their gender, but because of their achievements. “Before this happens, we still need to discuss women in business, so that eventually it won’t need to be discussed anymore,” Liu Nan said. 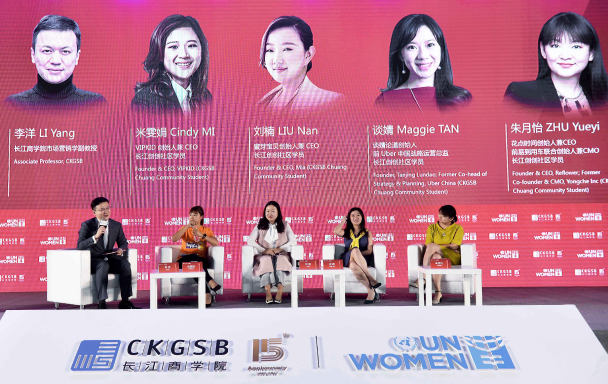 Panel Two in the afternoon, moderated by CKGSB Associate Professor Li Yang, gathered four excellent entrepreneurs and CKGSB students—Cindy Mi, Liu Nan, Maggie Tan and Zhu Yueyi. Each started their businesses for various reasons: some gave credit to their CKGSB MBA experience, some to previous working experiences and some to life. As for their different management styles, Liu Nan said she employed a “woman &  man” style, using Excel spreadsheets instead of powerpoints, but awarding bags to her senior management, while Cindy Mi said she tried not to play up her female side, instead playing football and drinking with staff. Maggie Tan said she trusted statistics to solve problems and Zhu Yueyi suggested that once a woman has a plan or dream, she should go for it and can tackle problems as they appear, saying “Build the plane after jumping off the cliff!” 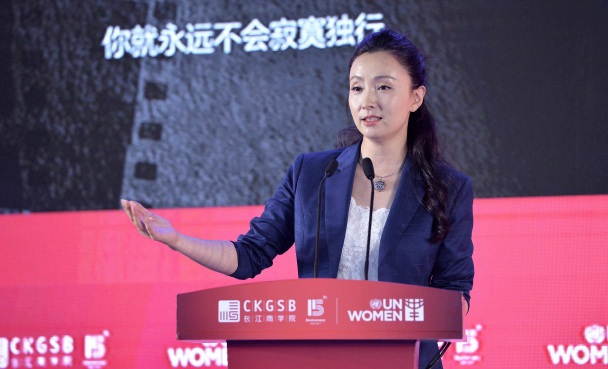 Next, actress Tao Hong made a speech titled “Philanthropy is magical”, touching on women’s leadership in philanthropy. She said she used her influence as a celebrity to participate in philanthropic programs, aiming to practice what she advocated. She called for people to care for mothers from low-income families, adding how she had donated her bone marrow stem cells and even involved her own child in the Ya’an earthquake relief programs. Any exhaustion, she said, was replaced by excitement and happiness about helping others and this was why she said philanthropy was magical to her. 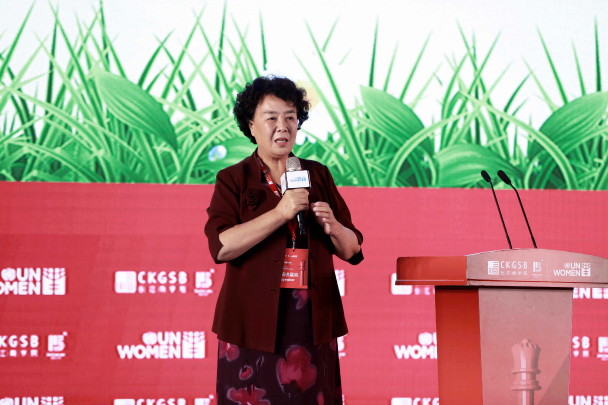 Following Tao Hong, Zhang Shuqin, now in her sixties, told the audience how she got into helping prisoners’ children. She was a police officer 23 years ago when she started to notice children whose parents had gone to jail and were then left unsupervised. They were not protected by Chinese law and rejected by the civil affairs department. “I decided to do three things,” Zhang Shuqin said, “Convince the government that it had a responsibility to care for these fellow Chinese people, set up Sun Village where these children could be protected, cared for and escape the fate of becoming criminals themselves, and thirdly, motivate other people to get involved.” For Zhang Shuqin, success is about changing someone’s fate. In an emotional speech, she called for more social responsibility and increased female leadership in philanthropy.

The day’s final panel in the afternoon was on women in philanthropy, moderated by Julie Broussard, Country Programme Manager of the UN Women China Office. When asked how women should show leadership in philanthropy and social responsibility, Zhang Huaying, Tao Hong, May Mei and Clare Pearson all gave interesting and varied answers. Among the points made were that women have more sympathy for the least advantaged people and for social issues, as well as more capability to gather resources, women will bring more professionalism and diversity to philanthropy and that women in the philanthropy sector look at what is going on in the outside world, which help women to succeed in their careers. Additionally, May Mei said companies could guide consumers’ behaviors to direct people’s attention to philanthropy or towards increased social responsibility. 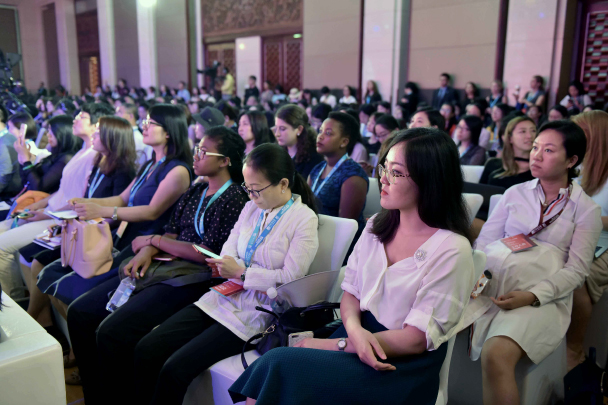