Amidst the COVID-19 outbreak, the breakdown of negotiations between Russia and Saudi Arabia sent yet another shock to capital markets worldwide, resulting in crude prices tumbling by nearly half since the beginning of the year. As the world’s largest oil importer, China has the opportunity to reduce relevant manufacturing and transportation costs to achieve faster economic recovery from COVID-19. However, the net effects to China are not all positive as the shock is a global one. The Cheung Kong Graduate School of Business (CKGSB) is pleased to address this pertinent topic on an upcoming webinar, titled ‘Impact of Oil-market Shock on the Global Economy,’ featuring CKGSB Professor of Management Practice of Governance and Innovations at Large Corporations and former Chairman of China Petroleum and Chemical Corp (Sinopec), Fu Chengyu. The webinar will address issues such as:

Please join us for this special CKGSB webinar, and share the registration details below with your colleagues.

RSVP now to register! We will confirm your registration by email, and send you the webinar login details. 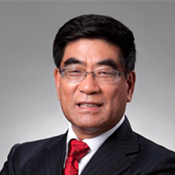 Mr. Fu was born in Heilongjiang Province, China. He graduated from China’s Northeast Petroleum Institute majoring in geology, and later received a master’s degree in petroleum engineering from the University of Southern California USA..

Mr. Fu has over 40 years of experience in the oil & gas industry. He had been Chairman and CEO of CNOOC, Chairman of SINOPEC, member of the 17th the Central Commission for Discipline Inspection (CCDI) and member of the 12th Standing Committee of the Chinese People’s Political Consultative Conference (CPPCC), a political advisory body in China.

He was the member of the board of the UN Global Compact (UNGC) and is Honorary Chairman of UNGC Network China.

Over last 40 years in the oil industry Mr. Fu had almost 20 years experience working with international Oil & Gas companies in Joint Venture and he was one of the first Chinese executive appointed by foreign company in China in 1995.

Mr. Fu has been well recognized in the global oil & gas industry and the capital markets. He won numerous recognitions and awards, including “Asian Oil & Gas Industry’s CEO of 2004”, “China Economic Person of the Year” by CCTV and “The 14 Most Important People of the Year” by The Times in 2005, “The 10 Leading Figures of Chinese Enterprises” and “Strategic Vision Award” by the World Economist Group in 2006, “Best Executive in Asia” by Asia Money in 2007, and “Most Influential Business Leader in China” by Fortune Magazine in 2008. He was among “The 50 World Business Persons of the Year” by Fortune in 2011 & 2012, and “The 12 Most Noteworthy Business Leaders in the World” by Wall Street Journal in 2012. He was elected “World Oil & Gas Leader of the Year” by Energy Intelligence Group in 2012. He received the “Legendary Business Leader” award by Yale School of Management in 2013 and “Asia’s CEO of the Year” by Platts in 2014. He was selected into the list of “40 Chinese returnees after 40 years of reform and opening-up” released by CCG, and won the model of “outstanding entrepreneurs in the past 40 years” selected by IFENG. He was awarded “2019 Lifetime Achievement Award for International Energy Policy & Diplomacy” by Al-Attiyah Foundation Qatar. Among his other awards, there are “Excellent Practitioner on Environment and Development” by the UN Environment, and “South-South and Triangular Cooperation Champion 2013” by the United Nations Office for South-South Cooperation. He has also won several domestic management and technology awards. Mr. Zhou Li joined CKGSB in 2010 as an Assistant Dean. He is primarily responsible for the School’s English-language Executive Education Programs, Global MBA Program, overseas operations, Case Center and applied research projects. He also serves as Chief Editor for CKGSB Knowledge, the School’s English-language magazine. He teaches “Understand China and Its Business People” to Executive MBA students of top-tier business schools and senior executives of global companies from around the world.

Prior to CKGSB, Dean Zhou worked for more than 20 years as CEO and in other management positions at telecom, IT, investment and consulting companies in Canada, Hong Kong and mainland China. Before he joined the corporate world, Dean Zhou was on the faculty of Renmin University in China, where he developed and taught International Business Management courses and was given the ‘Best Lecturer’ award. He received his Bachelor’s Degree in Economics at Renmin University in China and his MBA at McGill University in Canada.