by Ouyang Hui and Weili Wu

Testing of China’s new digital RMB is well underway, but it may have difficulty beating out the competition

On January 5, 2022, the pilot version of the People’s Bank of China’s (PBoC) digital RMB app was released for download. After only two days, almost 50 platforms, including e-commerce giants Tmall and JD.com, were already providing access to the digital currency system as a form of payment.

The PBoC began its research and feasibility studies into a digital currency as early as 2014. After several years of development pushed forward by Facebook’s announcement of their digital currency Libra in 2016, a “closed-loop test” of China’s digital RMB was launched in September 2019, with simulations involving a number of commercial and non-government payment options. Then in August 2020, China’s digital RMB underwent a soft launch in 10 major cities across the country, including Shenzhen, Chengdu and Suzhou.

In March 2021, all six major state-owned banks launched and began promoting digital RMB wallets, and in May of the same year a foreign bank, the China subsidiary of Germany’s Commerzbank became the seventh commercial bank to participate in public testing. Following this, the PBoC issued a White Paper to clarify the basic functions and purpose of the digital RMB, explaining the development background, target vision, design framework and relevant policy considerations of the new system.

The PBoC White Paper made it clear that the digital RMB is legal tender issued by the central bank, and has the same basic functions as any form of money such as a measure of value and a medium of exchange. Aside from transfers being digital, the management mechanism for its issuance and circulation is the same as that of physical RMB, and it remains a liability of the Central bank to the public, backed by the credit of the state.

As the digital RMB is primarily used to meet domestic retail payment needs, it should be issued to the public and used for daily transactions in order to reduce transaction costs across society.

The retail payment sector in China is already extremely competitive and an effective rollout of the digital RMB will face many hurdles. Currently, the two most successful payment platforms in the sector—WeChat Pay and Alipay—have been able to dominate due both to the convenience and security they ensure.

Most individual users of WeChat Pay and Alipay hold their liquid assets in money market funds. Through the apps, users can make payments directly using money market fund shares, greatly enhancing the efficiency of the payment process. Also, WeChat is the most frequently used social networking app in China and many people conduct transactions through WeChat every day, which leads to a large pool of funds being deposited in the collective WeChat wallet. If WeChat users choose to withdraw funds from their wallet, there is a very small fee.

Additionally, for a payment platform to occupy a share in the retail payment space, it must be supported by a large number of vendors. For example, due to the overwhelming dominance of its app Taobao in the early days of the e-commerce sector, Alipay occupied a large share of third-party payments for a long time.

Payment software also needs to provide additional functions to be accepted by users, as few people are willing to open a new app simply for payment. The average time a mobile phone user in China spends on WeChat per day is as high as four hours, so when it comes to paying, it is already a habit to open the app, or the app may even be open already.

Trying to catch up

For the digital RMB to dominate the retail payment space, reaching the same level of convenience as the two major payment platforms is a necessary condition, and the digital currency still has a long way to go. Digital RMB wallets have not yet been seamlessly integrated with money funds, so from the perspective of financial asset allocation, holding digital RMB is equivalent to holding cash and has a zero return.

The lack of social attributes of digital RMB wallets and the lack of public interest in digital RMB also make it difficult for digital RMB-specific wallets to become a natural gathering place for funds. There are now so many apps on the market that the real estate on a person’s phone screen is increasingly sought-after. This means that users are much more likely to use WeChat and Alipay to pay, as they’re on the home screen and often used.

Digital RMB wallets can be embedded with WeChat Pay and Alipay, but this will have little tangible effect. The financial institutions that partner with Alipay and WeChat Pay are simply sources of funds that are used when making payments, and the digital RMB will likely become the same, rather than being a transactional channel in and of itself. This would mean that the payment function—scanning a QR code—would likely remain the same.

As part of the initial digital RMB trial, users were given a sum of the currency in order to test it. But since there is currently no real benefit or need to hold digital RMB, by the time customers have spent their existing digital RMB, there will not be much incentive for customers to convert further assets into digital RMB. So even if it had the same functionality as WeChat Pay or Alipay, it would still not be able to maintain a large number of active users.

The digital RMB has some unique advantages over current payment platforms, but it seems unlikely that these will help it become a mainstream retail payment tool.

The controlled anonymity of the digital RMB allows for better privacy protection, but there are few scenarios in the retail payment space where users need to consider such issues. Food, clothing, housing and transportation transactions will not motivate users to sacrifice convenience for privacy protection.

There is also functionality that allows for dual offline payments—where both the paying and receiving device are not connected to the internet—and this is indeed a useful feature, especially in remote areas, or in times of natural disaster. But the problem is that these payment scenarios are inherently unlikely, and the vast majority of use cases do not require dual offline payments. More critically, users are unlikely to have large stores of digital RMB, so by the time they do need to make such a payment, they may not have enough to do so.

The cost of withdrawing digital RMB is zero and this is an improvement on third-party payment platforms, but we need to note that unless the supply of goods or services is a monopoly, the choice of means of payment is usually determined by the payer, with the convenience of the payer being the first priority for the recipient. For example, for payments made with credit cards, banks charge merchants a fee, but this fee is all borne by the merchant, who is willing to do so for the convenience of their customers.

One issue that needs to be clarified in the promotion of the digital RMB is whether it will be market-based or administrative. If it is market-based, the current domestic retail payment demand is already largely met by the existing payment system. Promoting the digital RMB through marketization would mean a significant upfront capital investment and the risk of failure. Historical experience shows that governments struggle to outperform the private sector, so the digital RMB may not win that competition.

But if the currency is promoted administratively, then the problem is much simpler. All that is required is to mandate all third-party payment platforms to give up their payment channels and replace them with digital RMB. The problem faced in this scenario would be how to compensate the third-party payment platforms. There are no fees charged for digital RMB payment channels, so there is no way to compensate platforms unless the government subsidizes them.

In addition, the amount and number of retail payments made in China each year is astronomical. To build such a system requires a large amount of upfront investment as well as investment in maintenance later on, and if there is no fee for digital RMB, where will this capital investment come from?

Does it add up?

As social needs and science and technology evolve, payment systems need to be constantly updated. If payment systems are built entirely by the central bank, then slower technological iteration and missed development may be the result. It is important to understand that a government department, even if it has the resources, cannot outperform the entire market.

The tremendous advances in electronic payments in China over the past few years have been achieved precisely because of fierce competition among private enterprises. Once the competitive pressure disappears, the incentive to innovate will also disappear.

Overall, the digital RMB, as a public service product, should first be considered for its positioning and value before it is rolled out on a large scale. Like all profit-oriented businesses, it is important to first do market research to determine that there is a real market need for a product or service before rolling it out. It needs to be clear who the digital RMB is intended to serve and what features or experiences it can provide to users that the existing financial system cannot.

Although public services are not necessarily profit-oriented, their social benefits must still outweigh their costs for them to be meaningful. According to our analysis, the digital RMB will only provide users with a better experience than existing payment instruments in certain, very specific scenarios. Policymakers need to think through whether it is worthwhile to introduce such a tool for such a very small probability of use.

Despite record listings in the US in 2021, increased scrutiny from Chinese regulators is pushing companies to stay at home. 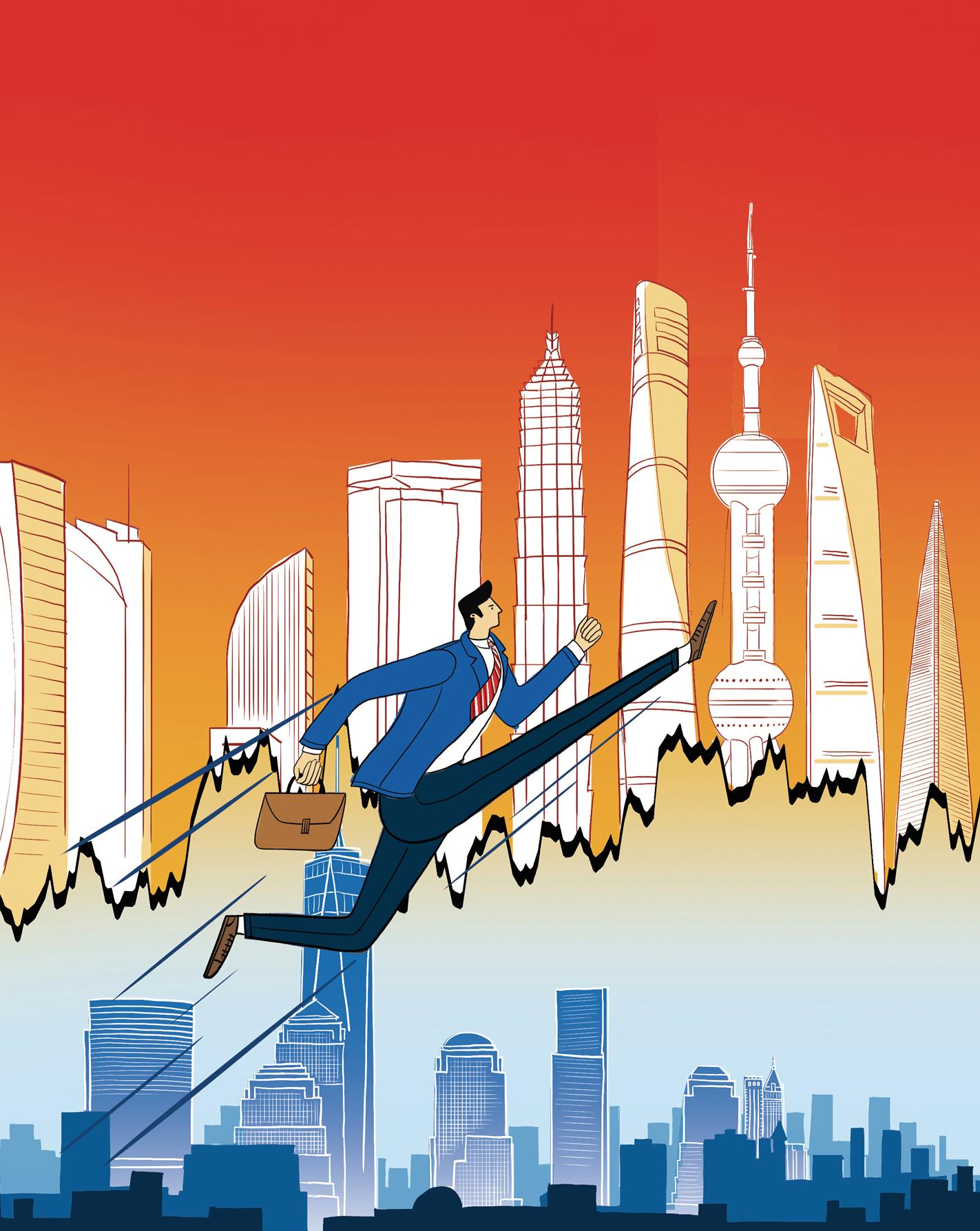 China is close to releasing a national digital currency, with the potential to upend the entire global financial structure. Chinese VC funds are muscling out international VC funding in the China market.