Commentary on the May 2022 CKGSB Business Conditions Index

Following on from April’s dismal data, the CKGSB Business Conditions Index (BCI) fell from 40.8 to 37.34 this month, which is well below the confidence line of 50.0 (Figure 1). In the last two months, the BCI dropped by 14 percentage points. This indicates that our sample of successful business owners in China is more pessimistic than ever before, except for February 2020 when the overall index fell to 37.31. If June continues along the same lines, we will witness a record level of low confidence.

As with last month and apart from the industry competitiveness index, only inventory bounced back. All the others continued to slide. Because most BCI indices are forward-looking, this means that most surveyed respondents have a pessimistic view of the future.

The current evidence is not enough to prove that China’s economy has fallen into recession, but the decline has been real over the past two months, which means that a recession is possible. In the Chinese economy, the downturn is an extremely sensitive topic, directly related to a deterioration in employment. There are at least two factors at work here. First, many companies have been laying off employees due to a slowing economy, which has put pressure on the job market. Second, masses of college graduates have entered the job market this year. Can the market provide enough white-collar jobs for these college graduates? In the past, expanding enrollment for graduate programs has helped solve the undergraduate employment issue, but as these graduate students graduate, the short-term effect of this method has failed to make such an impact. It cannot be the main solution to the employment problem. Cultivating the right market environment for small-and-medium-enterprises  is crucial to a healthy development because in any country, small and medium-sized enterprises are the main force in solving employment problem, especially in China.

What has led to such a dire economic situation? When it comes to such a large and complex economy as China’s, there are many reasons. But three stand out. First, the negative impact of many earlier regulatory changes is now being felt. An example of this is real estate. Housing prices have remained high in recent years, despite the government issuing a string of policies to regulate the sector, in particular putting financial constraints on real estate developers. This has finally had a huge impact on the market, with Evergrande Group in September 2021 becoming the biggest casualty. Unsurprisingly, this has had a knock-on effect on the desire to buy property. Since then, there have been capital problems with many real estate developers, and turbulence in the sector has cut off much investment in housing. Since real estate and its upstream and downstream industries account for about 20% of China’s GDP, the shrinking of the real estate market has hit overall economic performance dramatically.

Second, the negative impact of Covid control measures. Covid has had one of the top three impacts on the global economy over the past two years. And while originally, China used isolation and centralized quarantine to control the spread, the omicron variant has been able to evade these methods. As the virus returned to the country, Shanghai had to virtually shut down for two months. Many other lockdowns threatened cities like Beijing in May. In order to achieve zero-cases, cities and regions across China have implemented a range of control measures. Most of these control measures have shut down factories and stopped production in some of their industries and has led to a fall in incomes, which in turn has led to a decline in investment and consumption.

Third, the war in Ukraine has led to a surge in commodity prices – energy and food – which has put enormous pressure on operations in the Chinese economy. The conflict still shows no sign of abating. Since Russia is one of the most important energy producers in the world, and Ukraine a critical part of the world’s grain supply, the conflict between Russia and Ukraine quickly spread to the energy and food market, leading to a surge in prices. The Chinese economy today is a fairly open economy with large inflows and outflows. Every year, China needs to import a large amount of material, especially energy. The current rise in energy and food prices brought imported inflation to China, which has had a negative impact on business operations. As for the conflict, there is no clear end in sight for this conflict.

Fortunately, the Chinese government is now aware of these related problems. The central government emphasized that caution must be exercised when introducing austerity policies, and the pandemic, resumption of work and production are on the agenda. The problem of energy and food originates in international markets, and it cannot be solved by China alone. However, whether it is energy or food, China has the reserves to give the country room for maneuver.

The Chinese economy is in a relatively difficult period now, but China is a big market and a large and resilient economy, and such an economy cannot be easily defeated. Choosing what to do next means treading carefully.

This is a commentary on the CKGSB BCI report for May 2022 to which you are welcome to refer for detailed statistics. Do not hesitate to contact the BCI team by email for the accompanying BCI data report. 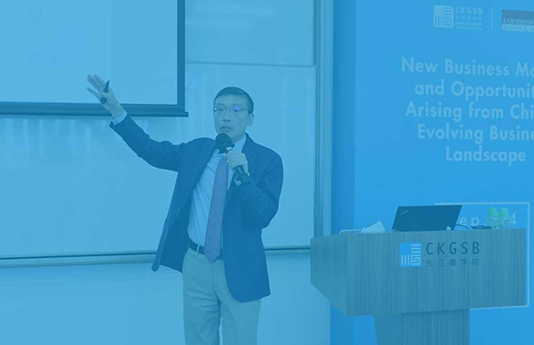