How Changes in Real Estate Will Affect China’s Economy Commercial banks in China release liquidity through commercial mortgages. House purchases have been a key source of income for real estate enterprises and local governments. However, in the context of a cooling real estate market, it is important to pay close attention to the impact, which a decline of house purchases has on the income of real estate enterprises and local governments, since it has the potential to create a chain reaction resulting in a liquidity crisis and rapid economic downturn.

China’s real estate market is in its worst downward cycle since 2015. Housing prices have continued to decline since the second half of 2021, with second- and third-tier cities experiencing negative year-over-year growth. Meanwhile, in June 2022, the sales area of commercial housing in China was 180 million square meters, down 18% year-on-year.

Will the current fall in house prices continue?

Meanwhile, there are a large number of unfinished homes, further reducing the willingness of residents to purchase. Since 2016, sales of commercial housing have significantly outpaced completion: the cumulative sales area has reached 10.3 billion square meters, while only 5.9 billion square meters of housing has been completed. In the next 12 years, real estate developers will focus more on completion and less on land acquisition and starting new construction projects.

In fact, housing companies have recently struggled to acquire land. In first half of 2022, land transactions halved compared with the same period last year. Only 74.91 million square meters of residential land was traded in 100 large and medium-sized cities, a cumulative year-on-year decrease of 57%. The cumulative value of land transaction prices this year was RMB 204.3 billion, a cumulative year-on-year decrease of 46%. The decline in land transactions has brought downward pressure on subsequent new construction projects, as well as the revenue and expenditure of local governments.

The key is to ensure that systemic risks do not occur in the future. So far, the risks in the real estate market are under control, with no large-scale crisis in sight for the time being. This is because:

-Firstly, the current downward cycle of interest rates means that the probability of large-scale mortgage defaults is relatively small. Falling interest rates will reduce pressure on household mortgages, lowering the risk of defaults. Although the US Federal Reserve interest rate hike have limited the easing of China’s monetary policy to some extent, there is still space for further easing considering China’s low CPI and the downward pressure on the economy.

Secondly, housing prices in second- and third-tier cities in China have fallen by less than 5%. Chinese residents generally pay a down payment of 20% to 30% on purchases. Thus, it is hard to see large-scale defaults when the decline in house prices is less than the down payment ratio.

Commercial housing is the most important asset for Chinese residents. If there is no large-scale unemployment and loss of repayment sources, the risk of homeowners defaulting is relatively low. The current unemployment rate in urban China is 5.5% and 5.8% in 31 major cities, below its peak. Moreover, unemployment has declined recently under the improvement of the COVID-19 situation.

The risk of China’s real estate, such as that of unfinished buildings, are mainly concentrated in the capital chains of small – and medium-sized enterprises. Risks of contagion are relatively small.

As for banks that have high credit rating, real estate only accounts for less than 5.5% of their assets. As of June 2021, the total debt of Chinese real estate developers was about RMB 20 trillion, including loans, bonds and trusts. Compared with the total assets of China’s banking industry of RMB 371 trillion, the risk is more manageable.

Also, Chinese banks have accumulated several impaired assets (those valued at less than book value) in the past several years. Even if there is a partial default, the risk of contagion will be controllable. The current banking industry has a high margin of safety with a provision coverage ratio of 200% and a non-performing loan ratio of 1.7%.

Furthermore, the Chinese government is expected to take measures to prevent the crisis from spreading. In response to the risk of unfinished buildings, the government may consider setting up a real estate fund and may introduce a nationwide policy involving issuing special bonds for shanty reform to prevent further deterioration of the real estate market.

China has experienced a downturn in real estate prices in 2012, 2014 and 2018, all of which correspond to a slowdown in economic growth. This time, the price of commercial housing is expected to decline for a longer period of time than in the past.

Also, since 2010, the driving effect of real estate on the overall economy has become less significant, mainly due to an increase in household leverage, but also because the capacity to drive economic growth through fixed asset investment has reduced.

In the future, China will lower its economic growth target, focus on stabilizing employment and prices, and rely on internal consumption to achieve longer-term economic development. This means that China will have to put an end to its reliance on real estate infrastructure.

The impact of the current real estate downturn on broad asset classes will involve the following: 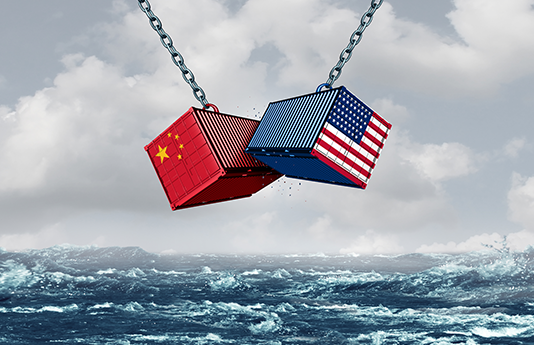