Across Asia, women currently account for the majority of university graduates and are a key source of today’s talent pool, but a 2012 report by McKinsey & Company revealed the stark reality that only 8% of board members and 9% of top managers in China are female. The common perception is that women currently enjoy more creative and productive career opportunities compared to previous generations, but the pace of change to level the playing field and improve gender diversity and women’s leadership has still been slow. “Women’s leadership is not only the right thing to do, but it’s also smart for our enterprises, country and society to discuss women leadership in the business context,” said Yang Lan (pictured below), Chairperson of Sun Media Group and acclaimed host of China’s longest-running in-depth talk “Yang Lan One-on-One”. “In today’s business environment, talent and ideas are increasingly important in order to gain a competitive advantage. As a result, gender equality in employment becomes essential,” said Dr. Xiang Bing, Founding Dean of Cheung Kong Graduate School of Business (CKGSB) to a standing-room only crowd at a seminar jointly hosted by CKGSB and the United Nations Entity for Gender Equality and the Empowerment of Women (UN WOMEN) on Friday, October 31, 2014. Dr. Xiang (pictured above) added, “At CKGSB, 57% of the school’s MBA students are women, while the proportion of female students in the 2014 intake of EMBA students reached a record high of 27%. As China’s premier educator of top executives – many of whom are highly successful women – CKGSB is committed to helping its female students seize opportunities for leadership through the school’s world-class research and unparalleled network of business leaders in China and around the world.” “Statistics show that a close relationship between women’s workforce engagement and economic growth leads to an increase in GDP, poverty reduction and the creation of a more stable society,” said Julie Broussard (pictured above), UN Women Country Program Manager in her opening address. Yet she noted that the representation of women at corporate board level and in executive committees in the region remains strikingly low. Mr. Geoff Wilson (pictured above), Chief Operating Officer of KPMG Asia Pacific delivered a keynote speech in which he described how diversity in leadership enhances corporate performance, citing an extensive 19-year study of 215 Fortune 500 firms by Roy D. Adler of Pepperdine University to make a compelling case that having women in leadership positions is a smart strategic management decision for business. “His study shows companies with a high number of women executives are more profitable than their peers. Not just a little, but significantly more profitable. In fact, companies with women in leadership positions are 20%-70% more profitable than their industry average,” said Wilson.

While the panel discussion revealed that there are key cultural differences between the East and the West — including different cultural norms and values, attitudes toward gender roles, and the division of labor in the household — similarities also abound. Yang Lan posed thought-provoking questions throughout a lively discussion, while providing sharp insight and commentary on shifting gender expectations in the context of China’s societal transformation and evolving business environment.

Geoff Wilson proposed the creation of a supportive, gender-intelligent work environment and culture “that is compatible with the family life to the benefit of all employees – men and women”, while Wilson and Lin Bo both stressed the importance of leadership, accountability, ownership, and a clear program to championing gender diversity at work, which would include flexible working conditions and locations to establish the proper work-life balance as well as female leadership. 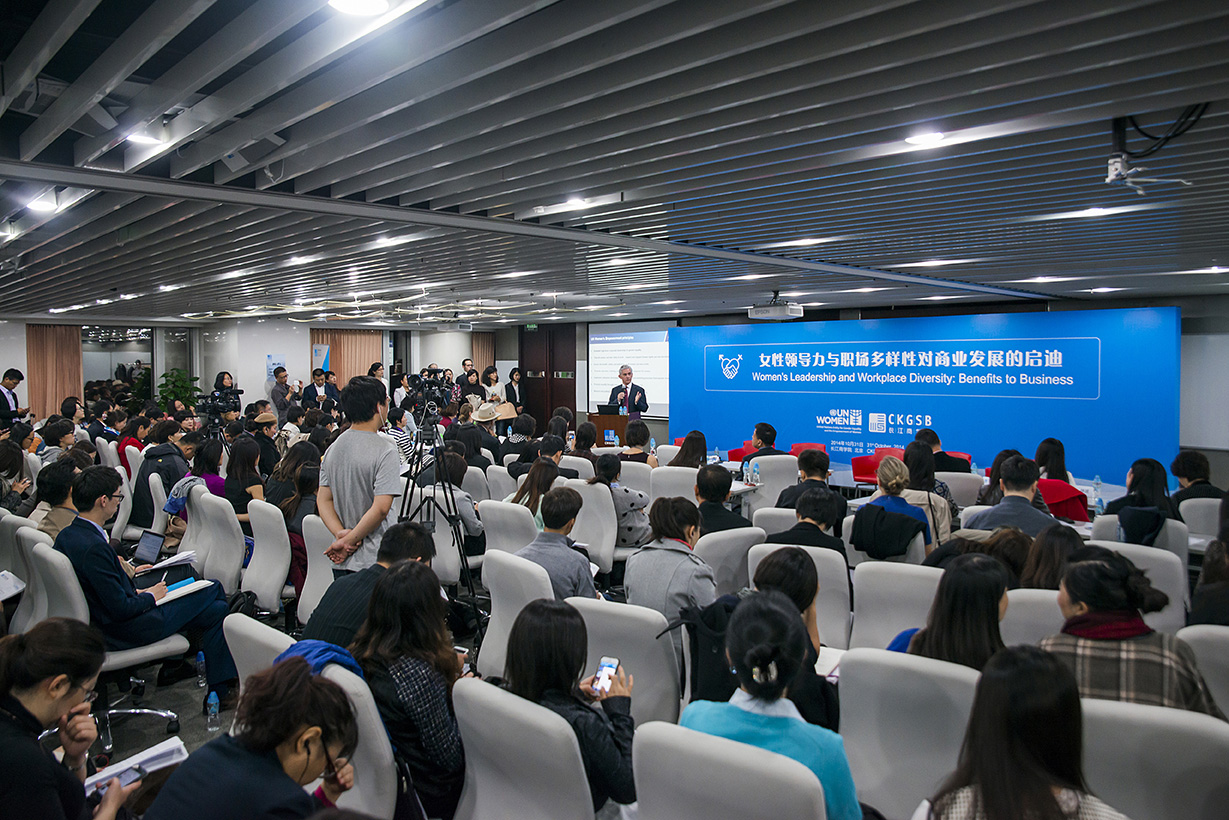 Didi Dache COO Liu Qing, a current CKGSB DBA student, emphasized the importance of “setting up women-only organizations within the company, holding breakfast seminars and establishing platforms for women to exchange ideas” as a way of providing professional female networking and mentorship opportunities. In addition, Wilson added that it is crucial that top management visibly champions gender diversity, “having male leaders step up beside women and lead on gender equality” in order to put women’s leadership as a key priority on the strategic agendas of organizations and drive further discussions.

At the end of the hugely successful seminar, the participants answered questions from an audience which included senior-level executives from leading Chinese corporations, as well as representatives from UN Women, WEConnect and Lean In.