This survey was led by Dr. Zhang Xiaomeng, Associate Professor of Organizational Behavior, Associate Dean for Executive Education and Co-Director of the Leadership and Motivation Research Centre at the Cheung Kong Graduate School of Business (CKGSB)

The COVID-19 pandemic has forced us to press pause on the Chinese economy, with companies now facing challenges on the issues of production and employment resumption. Now more than ever, it is vital that we work together to recover from losses while remaining vigilant to ongoing risks. Individual psychological resilience has a strong bearing on corporate resilience and the time it takes for the Chinese economy to bounce back. Whilst it goes without saying that a strong rebound is essential, the issue now is how to resume production and employment whilst ensuring risk is kept at bay.

Following the first episode on the overall discovery of resilience during work resumption, this Episode #2 will focus on the topic of gender and explore the correlation between various variables such as resilience, stress, and loyalty, to name a few.

2. Women are strikingly underrepresented in management roles. From a female perspective, gender is negatively correlated to the level of responsibility and years of work. As level rises and working years increase, the proportion of women to men gradually decreases.

3. Female respondents mainly work in lower-revenue, small and medium-sized enterprises, outnumbering men in companies with a headcount of under 1,000 and with less than RMB 50 million in revenue.

8. The average value of male psychological resilience (30.64) is higher than for women (29.18; maximum psychological resilience value of 40), and the average value of female anxiety (2.97) is slightly higher than that of men (2.75; maximum anxiety value of 21). The average level of depression (3.97) is slightly higher in women than in men (3.55; the maximum depression index is 27). Men and women as a whole showed higher levels of mental resilience, with anxiety and depression scores within normal ranges. Female leaders and executives are more resilient than their male peers.

Sample distribution from a gender perspective

2. Company type: More than 85% of respondents are from private firms. Those from state-owned and other types comprise 5.33% and 5.79% respectively. Foreign companies and non-profit organizations account for a relatively low proportion: 2.6% and 1.23% respectively. From a gender perspective, the proportion of female respondents in foreign companies, non-profit organizations and other types of company is higher than that of men.

3. Seniority: Respondents can be categorized by level of leadership as follows: From the perspective of gender distribution at various leadership levels, women comprise the greater percentage of respondent’s ranks as employees, at 57.81%. As leadership level rises, the proportion of women gradually decreases. At director level, the gender ratio of women to men is lowest at 23.79% to 76.21%. 786 of respondents were at leader level, of which 599 were men and 187 women. 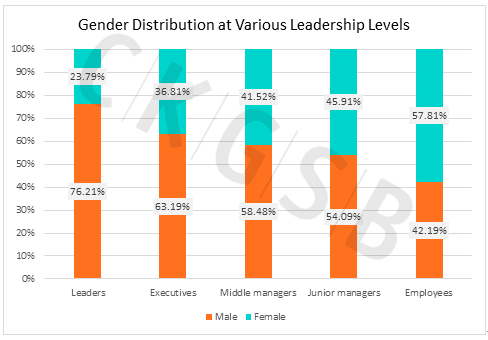 From a women’s perspective, gender and rank have a negative correlation. The Spearman correlation coefficient is -0.23 **, and the p value is 0.00, which means the higher the rank, the lower the proportion of women.

4. Education: In gender terms, more male than female respondents completed technical secondary college to junior college or a bachelor’s degree. Respondents with high school or lower or post-graduate and above education are proportionally more male than female. Overall, the proportion of respondents with bachelor’s degree or above (including undergraduate and postgraduate) is somewhat higher for women (59.16%) than for men (55.77%). Overlaying gender and leadership rank to analyze educational distribution, we found that:

Apart from female executives, female leaders, middle managers, grassroots managers, and regular employees with a college degree make up a higher proportion than men at the same level. Female senior executives comprise a slightly lower percentage of undergraduates than men.

The proportion of postgraduates and above of women in all ranks is higher than that of their male peers. 6. Number of employees: In the sample as a whole, respondents from small and medium enterprises accounted for a relatively high proportion: 60.3% of respondents were from companies with fewer than 500 employees. It is worth noting that more than 20% of the respondents (1307 people) are not aware of the annual revenue of the company they work for. Among female respondents, 31.22% were unclear about their company’s revenue, which is a much higher percentage than for men (14.9%). This may be due to the low representation of women in management (see Conclusion 2. Gender and rank negative correlation above). In addition, 76.82% (1004) of respondents who did not know their company’s revenue were regular employees, 14.61% (191) grassroots managers and 6.12% (80) middle managers. This result should attract the attention of senior management. When employees do not understand the basic situation and the company’s development direction, their loyalty and company efficiency, as well as their own psychological resilience and anxiety at work should be called into question. The sample data shows that from the perspective of women, gender and working years have a negative correlation. The Spearman correlation coefficient is -0.13**, and the p value is 0.00, which means as working years increase, fewer women work at the companies.

9. Industry: The industries with the highest proportion of respondents are real estate, the internet, production/processing/manufacturing, finance, medicine /healthcare, and the service sector.

Gender ratio by industry: highest proportion of women: healthcare (75.27%); lowest: energy/minerals/environmental protection (22.08%), the most balanced gender ratio of men and women is in trade/wholesale/retail (50.54%:49.46%). Our sample comprises 786 top leaders, of whom 599 are men and 187 women. The three industries with the highest number of male leaders are: real estate (121), production | processing | manufacturing (105), and internet (74). The three industries with the largest number of female leaders are: trade | wholesale | retail | lease (24), culture | media | entertainment | sports (22) and services (20). Gender differences regarding the return to work The sample data shows that from the perspective of women, gender and ‘pay cut and return to work status’ are negatively correlated. The Spearman correlation coefficient is -0.12 ** and the p-value is 0.00, which means that as the options change from ‘full return to work with no pay cut’ to ‘no pay and not back to work’, the proportion of women is increasing. 3. Expectations for the full recovery of the business: Female leaders (45.99%) and female senior executives (49.49%) have a lower percentage of judges on the restoration of business before the end of March than male leaders (53.09%) and male senior executives (50.10%). The proportion of women leaders and executives who believe they will resume business in April-May, June and beyond is higher than that of men at the same level. The highest percentage of respondents not working from the office (day 0) were female regular employees (35.92%), and the lowest were male middle managers (14.50%). Grouped by ‘gender and industry,’ the highest proportion of respondents who work from the office for 5 days or more a week (61.66%) were men in the production | processing | manufacturing industries, while the lowest were women (10.39%) in the healthcare industry.

Most respondents who didn’t work from the office at all (0 days) were women in healthcare (69.08%), and the lowest proportion were women in energy | minerals | environmental protection | industries (5.88%).

Grouped by ‘gender and rank,’ the highest proportion of “working from home less than half the time,” is that of male leaders (52.59%) whereas the lowest were women middle managers (37.82%). The percentage of selecting working 1.5 times more was highest among female middle managers (5.10%), and the lowest among male grassroots managers (1.49%).

3. Salary reduction and layoffs: Percentage of women with no pay cut (66.39%) is lower than men (70.26%), and the proportions of various salary reductions for women are higher than for men.

Except for leaders (as they didn’t need to answer questions whether they think they will be laid off and have pay cuts), the proportion of women who think they will not be laid off at all (71.06%) is lower than that of men (73.39%), and more women than men think there is a 20-50% possibility to be laid off. There is not much difference between men and women in the remaining three items.

The sample data shows that from the perspective of women, gender and layoff expectations have a positive correlation. The Spearman correlation coefficient is 0.14 ** and the p value is 0.00, which means that as the possibility of layoffs increases, the proportion of women is increasing. The sample data shows that from the female perspective, gender and expectation in salary decrease are expected to positively correlated. The Spearman correlation coefficient is 0.16 **, and the p value is 0.00, which means that as the expected decrease in salaries increases, the proportion of women is increasing. 5. Loyalty: Statistics on the probability of job change, the proportion of “will definitely switch jobs” is slightly higher for men (6.97%) than for women (6.42%), and in options “maybe” and “less likely” the proportion of women is higher than men, and the option of “absolutely not changing jobs” sees more men (43.13%) than women (31.76%). From the perspective of ‘gender and rank,’ most selecting “absolutely no switching jobs” are male executives (57.06%), and the least are female regular employees (27.73%); the “most definitely will switch” option sees the largest proportion of male employees (9.6%) and the lowest proportion of female senior managers (3.75%). We have indexed the questionnaires related to satisfaction and stress, and the gender comparison is shown in the following graph: From the ‘gender and rank’ perspective, the proportion of ‘very satisfied with their work’ is the highest for male regular employees (27.45%) and lowest for male leaders (11.52%). Among respondents who chose ‘dissatisfied’, the largest proportion is male leaders (11.52%) and among respondents who chose ‘very dissatisfied’, the largest proportion is female leaders (3.21%), which partially reflects the current pressure of business leaders in responding to the epidemic.

As mentioned above, the overall stress index of women is lower than that of men; in terms of sub-items, more men than women opted for the “very small”, “higher stress”, and “very high” options. From the perspective of ‘gender and rank,’ male leaders (68.78%) and female leaders (66.84%) selected the epidemic outbreak as the main source of stress, and among respondents selecting the finance the largest proportion is the male grassroots managers (48.64%), and the highest percentage choosing the work intensity is male middle managers (37.89%). Except for middle managers, the average score of anxiety of women in all ranks is higher than that of men. The female leaders have the highest anxiety score (3.69) and male regular employees have the lowest scores (2.42). Except for middle managers, the average depression score of women in all ranks is higher than that of men. The highest score for depression was that of female regular employees (4.19), and the lowest score was for male executives (3.16). The above is an analysis of the survey data from the perspective of gender. We see that before and after the resumption of work, the interviewed entrepreneurs and employees showed high resilience, optimistic expectations, low to medium stress levels, high satisfaction, high levels of loyalty, but gender differences are prominent. Compared with male respondents, female respondents suffered greater income reduction risks before and after returning to work, higher work intensity, higher levels of anxiety and depression, and lower levels of psychological resilience. Therefore, for female employees, companies should give more care and trust, and allow for more flexible office methods to improve their loyalty to the company.

At the same time, the study found that female leaders and executives show higher levels of psychological resilience than men of the same level under the premise of greater pressure, which is critical to improving the resilience of the entire organization. Therefore, companies should give female employees a smoother promotion path, more empowerment and growth opportunities in the selection and retention. At the same time, they should stimulate women to show more leadership, and promote the advantages of a more balanced leadership for the benefit of the companies’ development after the epidemic.

Please stay tuned for our Episode #3 on organizational resilience.