Beijing, 7 March 2012—A newly-formed All-Party Parliamentary Group (APPG) for East Asian Business was launched last Wednesday in London’s Houses of Parliament by international leaders from government, industry and academia. The purpose of the group is to facilitate the development of relations between businesses in East Asia and the United Kingdom. It will do this by bringing together members of the UK House of Commons and House of Lords with executive leaders, entrepreneurs and related interest groups from both regions to share knowledge and perspectives.

China-based CKGSB is acting as the Secretariat to the APPG for East Asian Business. The school’s main campus in Beijing and European headquarters in London will provide administrative support and advice to the officers of the group as they develop its programme of activities.

In order to deliver on its mission of developing relationships between businesses in East Asia and the United Kingdom, the APPG will present a series of seminars and events, inbound and outbound trade delegations and observational reports.

The APPG’s officers and supporters, along with CKGSB, hope that by promoting the sharing of knowledge between the countries of East Asia and the United Kingdom on issues pertinent to business and trade, the APPG will make a positive contribution to those respective communities. 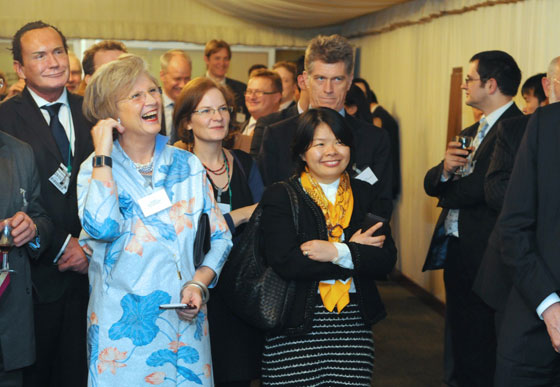 “Right now, if you ask a British person or European, ‘name me someone that represents America,’ they can say Steve Jobs or Bill Gates,” noted Lord Wei at the launch event. “They can’t do the same for Asia. And that’s a real shame, because we’re going to be doing so much together. And I think through the stories that we hear, we can build trust and understanding.”

Speaking at the launch, CKGSB’s Xiang emphasised mutual learning and developing new models for sustainability. He concluded his remarks by noting that the APPG for East Asian business, “can serve as an important platform for learning and for sharing best practices, knowledge and wisdom [between the UK and East Asia].”

“If we open ourselves up to new thinking, new ideas and new models,” said Xiang, “I am sure we can do much together for economic prosperity, social betterment and the common good.”