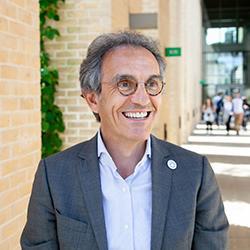 Chief Economist of Mars, Incorporated; Founder of Economics of Mutuality

Bruno Roche is an economist, businessman, speaker and author. He is the founder and leader of the Economics of Mutuality, a new school of thought and a disruptive model for business performance designed to transform business at the core, restore broken relationships between business, society and the environment – and by doing so equip business to thrive by meeting the needs of the world.

He served as the Chief Economist of Mars, incorporated since 2006. In that position he has been leading Catalyst, a global thought leadership capability and internal corporate think tank to Mars which has been the laboratory for the Economics of Mutuality since 2006.

He co-created the Economics of Mutuality Labs at the business schools of Oxford University (SBS) and CEIBS (Shanghai); he is a visiting lecturer in different universities and serves as an expert to the World Economic Forum. His education and doctoral research interests followed an applied maths path with a specialization in international economics & finance and management sciences.

Bruno co-authored Completing Capitalism: Heal Business to Heal the World, which has been published in both English and Chinese. He has also co-edited an upcoming Oxford University Press book called Putting Purpose into Practice: the Economics of Mutuality with Saïd Business School’s Professor Colin Mayer.