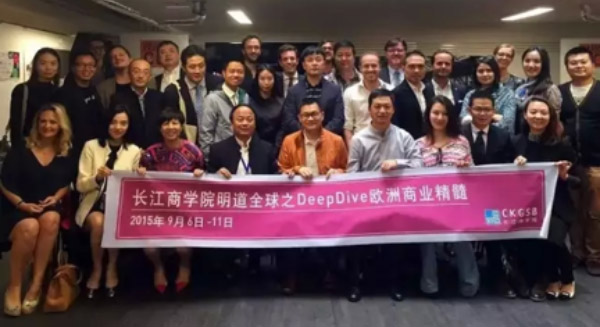 A group of Chinese business leaders recently gathered in Paris to attend the 2015 Sino-European Entrepreneurs Summit.

This CKGSB Executive Education program allows Chinese business leaders to gain a global perspective and open their view to understand and communicate with the world. With resources integrated on a global scale, Chinese business leaders must understand the rules of world economic development and the influence of different political and social systems and religious cultures on the management and operation of business before growing into a successful global business.

“Most of the entrepreneurs present (at the summit) can speak English, and this is a big step forward. Going global is based on the principle of winning respect and smooth communication. We should cooperate with foreigners with dignity, and speaking English is very important. Our business leaders can attempt to go faster with more ambition. Going global is not to purchase a piece of land overseas. It depends on vigorous strength and down-to-earth competitiveness to open the foreign market,” Minister Long said. 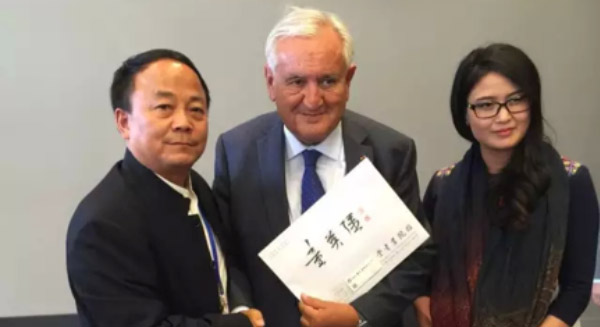 The CKGSB group also met with France’s Former Prime Minister Jean-Pierre Raffarin, who encouraged more Chinese entrepreneurs to open the European market with innovation. He also addressed the group’s questions on how RMB internationalization will influence Europe and the Chinese-European relationship.

“China has come second to the US as the most influential economy in the world. Her financial and monetary position will surely exert more restriction on the US dollar. In fact, RMB internationalization can go faster. It will cast impacts on many countries, of course, on the short term. But on the long term, it has become a general trend. Instead of trying to stop the trend, we should focus more on finding opportunities,” Raffarin said. 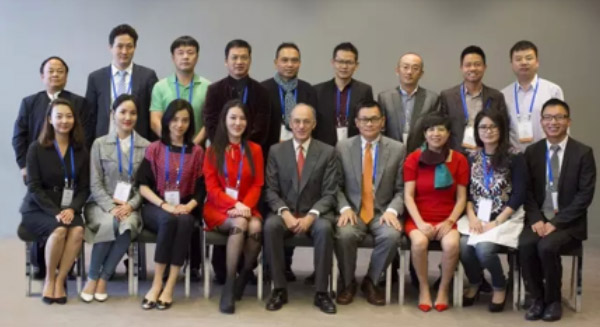 The CKGSB group with James Meyer Sassoon, Head of the Sassoon Family and an Executive Director of Jardine Matheson Holdings.

The group also heard from James Meyer Sassoon, Head of the Sassoon Family and an Executive Director of Jardine Matheson Holdings.

He spoke about how the Sassoon family has passed on its wealth for more than five generations, contradicting the Chinese proverb that says “wealth cannot last more than 3 generations.”

“I will share with you three secrets – first of all, involve as many family members in the family-run business as possible. Even if you want to start up with a new operation, you had better choose a core business from your family business. Cultivate in heirs and members of the family loyalty and enduring love to their business,” Sassoon said.

“Secondly, take firm control of the family business. This requires the family members to have a strong mind to resist temptation. Prevent them from selling their shares when the price is high, because this will dilute your control over the enterprise,” he said.

“Thirdly, remain humble and keen to the market. Take Jardine as an example. We were founded before the liberation of China. Our original business is railway construction and textile. Now we are involved in hotel, retail, real estate and financial services. To keep your family business energetic and adaptable is very important.”

The focus on maintaining and passing on family wealth continued with a Family Inheritance Forum featuring the first-ever gathering of representatives of three of the most prominent European family businesses: Jardine Matheson, Galeries Lafayette and Dassault Group. The CKGSB group left with valuable takeaways, including:

2. Success is a journey not a destination

4. Keep a beginner’s mind while fearing the force of market. The family legend is a joint effort of every generation. Every generation is a starter; never underestimate.

A final highlight of the summit was CKGSB Founding Dean Xiang Bing’s fascinating speech on the global implications of China’s transformation.

Another standout moment of the trip took place not at the summit but instead in a low, dim house in Paris. In this inconspicuous office lies Paris & Co., the largest innovation incubator in Europe and, with a 15-year history, one of the oldest in the world. It is the world’s first non-profit incubator concentrating on study tours. Welcome City Lab invited 10 innovation projects to present road shows for CKGSB students. 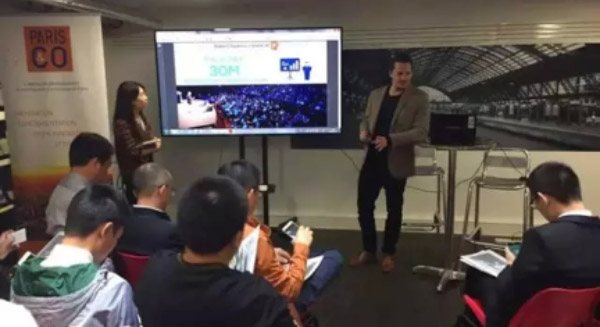 The students were impressed with the 10 enterprises for their ability to innovate and think outside the box, their mature technique and their rigorous strategy. Many agreements of project cooperation and investment intention were reached on the spot.

One attendee of the lecture said, “We need to be in different countries to listen, look and be exposed to different start-ups in order to bring these good projects home.”