On March 27, 2013 the Founding Dean of CKGSB, Xiang Bing, spoke at the Asian Leadership Conference in Seoul, South Korea. Entitled Confucianism Will Lead China to Become the World’s #1 Nation, the speech offered Dean Xiang’s insights on China’s economic policy and a political system for development based on Confucianism and its openness. The speech was covered by Korea’s Chosun Ilbo, and is translated below.

“Confucianism Will Lead China to Become the World’s #1 Nation” 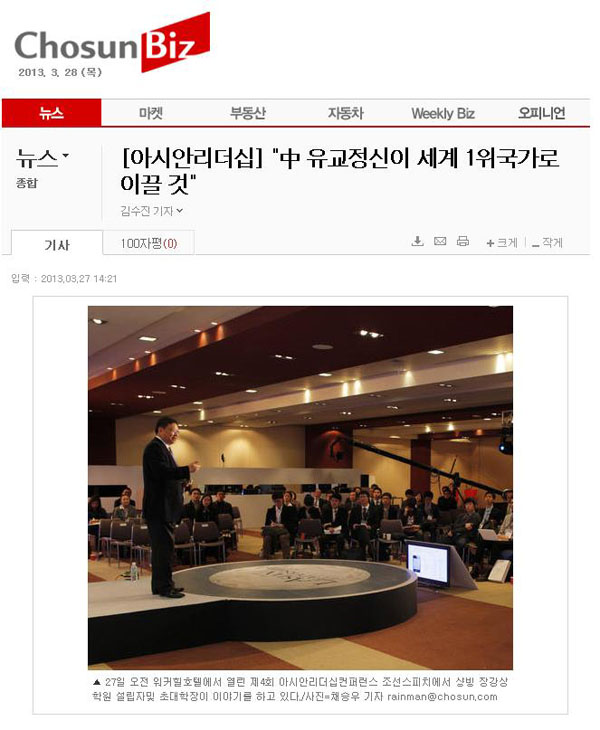 “Chinese capitalism is stronger than any other. Its openness will drive China to become the number-one country in the world.”

Dean Xiang Bing from CKGSB, China’s top business school, criticized general perceptions against China that it belongs to state capitalism. “Chinese policies are more open than those of any other country in the world” said Dean Xiang.

The theme of his speech, delivered on March 27, on the second day of the Asian Leadership Conference, was ‘Friends of Chinese Entrepreneurs.’ He seemed very comfortable with the stage. He consistently smiled and used natural gestures. He showed confidence when speaking. He is the Founding Dean of Cheung Kong Graduate School of Business (CKGSB), a renowned Chinese business school, where over 2,500 top Chinese CEOs and chairmen have studied.

His popularity was evident at the venue. The young audience, who gathered around this Chinese professor, showed great passion and interest in him and his insights.

Dean Xiang pointed out the reasons for why China’s open policy has not earned proper recognition. “First, it has exported through foreign companies such as Samsung, Hyundai, Volkswagen and General Motors. Most products that are made in China for the US market are labeled with American brands. Because the products have non-Chinese brand names on them, it is hard to think that they are made in China.”

He also stated that China’s support for foreign companies focusing on labor-centered industries also prevented the nation’s development. “Although iPhones are produced in China, the profit China earns is only 1.3% of its retail price. To earn 1.3%, China has paid laborers’ lives and pollution. Now, China needs to focus on high-value products.”

He argued that China’s open policy didn’t get properly recognized because most of the trade is exported by foreign companies. Dean Xiang also presented the historical background of China’s openness, “Every dynasty with an open policy was successful. In the Tang Dynasty, it was common to see foreigners from Japan, Iran, or India appointed as government officers.”

Key to China’s success: a political system based on Confucianism

Dean Xiang claimed that China’s political system based on Confucianism is the key to the country’s ongoing success. “China’s elites work for the government because Confucianism states that working for the community is the best occupation.” China has reached its current success through the elites’ strong leadership.

In addition, he anticipated that the trend in the rest of the 21st century will be shifted from Western individualism to a society based on Confucianism. “Because Confucianism values co-existence, it respects diversity. Confucianism deeply rooted in China will make China thrive even further,” he said.

China is becoming a fair society

He criticized problems that China has, which are unbalanced wealth distribution, pollution, lack of innovation and price competition. “The current urbanization rate of USA is 82%, but that of China is only 50%. If China works on solving some of its problems, it will become the largest economy in the world.”

“China is becoming a fair society,” he answered to the question from the audience about changes in China, “The old Chinese government did not take care of urgent patients if they did not pay, but now it provides care first. The effort to become a fair society is continuing.”