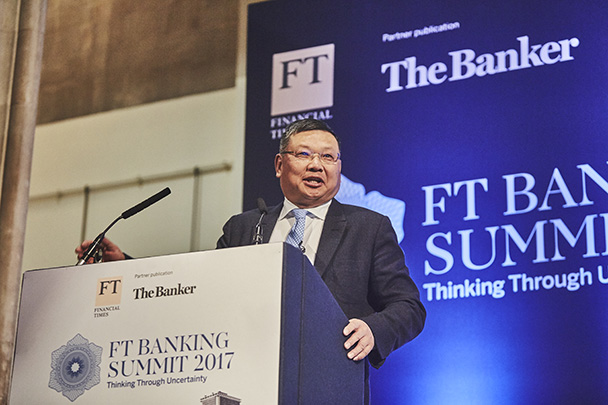 The annual FT Banking Summit, which took place as part of FT Banking Week, is recognized as a leading platform to examine the complex dynamics governing today’s uncertain economic and financial climate in order to chart a course for a sustainable, secure and successful banking sector. It attracts senior financial services leaders, economists, policy-makers and technologists to combine their insights, ideas, stories and expertise. This year, the Summit, titled “Thinking through Uncertainty”, evaluated the opportunities and risks in today’s complex global economic landscape. Dean Xiang’s keynote addressed China’s transformations over the years in relation to the rest of the world, and revealed the new drivers of growth for China as it enters a new era

During his keynote speech, Dr Xiang explained that today’s economic achievements and challenges are largely a result of neoliberalism that has shaped the economic policies of the last four decades. Fundamentally, he said, the economic model employed during this period has created considerable wealth, but it has also led to an imbalanced distribution of income and wealth. As a result, neoliberalism adopted by the UK, the US and China has given birth to vocal anti-globalization sentiments.

The need for reform, Dr Xiang said, has become urgent as some of the outcomes of de-globalization, unilateralism and populism potentially pose a risk to stability. “Moreover, in our political and economic systems, limited incentives have been provided to truly care for long-term interest of humanity,” emphasized Dean Xiang. “This collective myopia may have contributed to our environmental degradation and global climate change. Considering today’s advanced technologies, we must address this issue before collective myopia pushes humanity to extinction.”

Calling for an enhanced global governance system, Dean Xiang quoted Chinese President Xi Jinping’s recent report at the 19th CPC National Congress in October 2017. “As recently noted by President Xi Jinping, China champions the development of a community with a shared future for mankind, and has encouraged the evolution of the global governance system. President Xi has called on the people of all countries to work together to build a community with a shared future for mankind, to build an open, inclusive, clean, and beautiful world that enjoys lasting peace, universal security, and common prosperity.” Finally, Dean Xiang revealed the new growth drivers for China as it enters a new economic era. “China is replacing its economic drivers with new ones that are changing business models and the overall landscape. China’s new growth drivers include disruptive technologies, supply-side structural reform, development of the service sector, a new round of urbanization, deregulations of sectors like the financial, telecommunications, oil and gas sectors, expansion of domestic consumption, enhanced social security system, and the globalization of Chinese enterprises, such as leveraging the One Belt One Road initiative to compete and cooperate globally.