CKGSB Professor Zhang Weining says China needs an updated legal system in order for the sharing economy—one of the most thriving parts of China’s economy—to fully mature, according to a recent interview with Aju Business Daily, Korea’s renowned business daily known for its China-focused articles.

“The fundamental issue of the sharing economy lies on a credit-based economy, as credit is a must-have factor in sharing things,” said Prof. Zhang, whom the paper referred to as an expert in the Chinese internet platform industry. “The levels of credit can be established based on the legal system and a moral basis,” he said. an interview with Aju Business Daily in Seoul on Dec. 7

Fintech is the most thriving sector in China’s sharing economy, he said. “In China, people make payments and reservations with smartphones everywhere, for taxis, restaurants, hotels, gas stations, and even to street vendors,” he explained. “You’re good to go without your wallet, but not without a smartphone.”

Despite such rapid quantitative expansion, Zhang pointed out that it is time for China to focus on qualitative development in its fintech market which he says needs a long way to go compared to developed economies like the US. The government has to develop a current legal system to supervise the market and risk management systems using latest technologies like artificial intelligence (AI) and Big Data, he suggested. 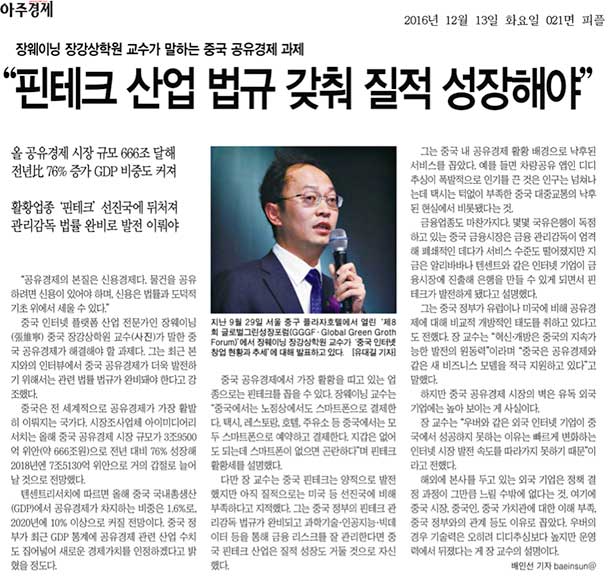